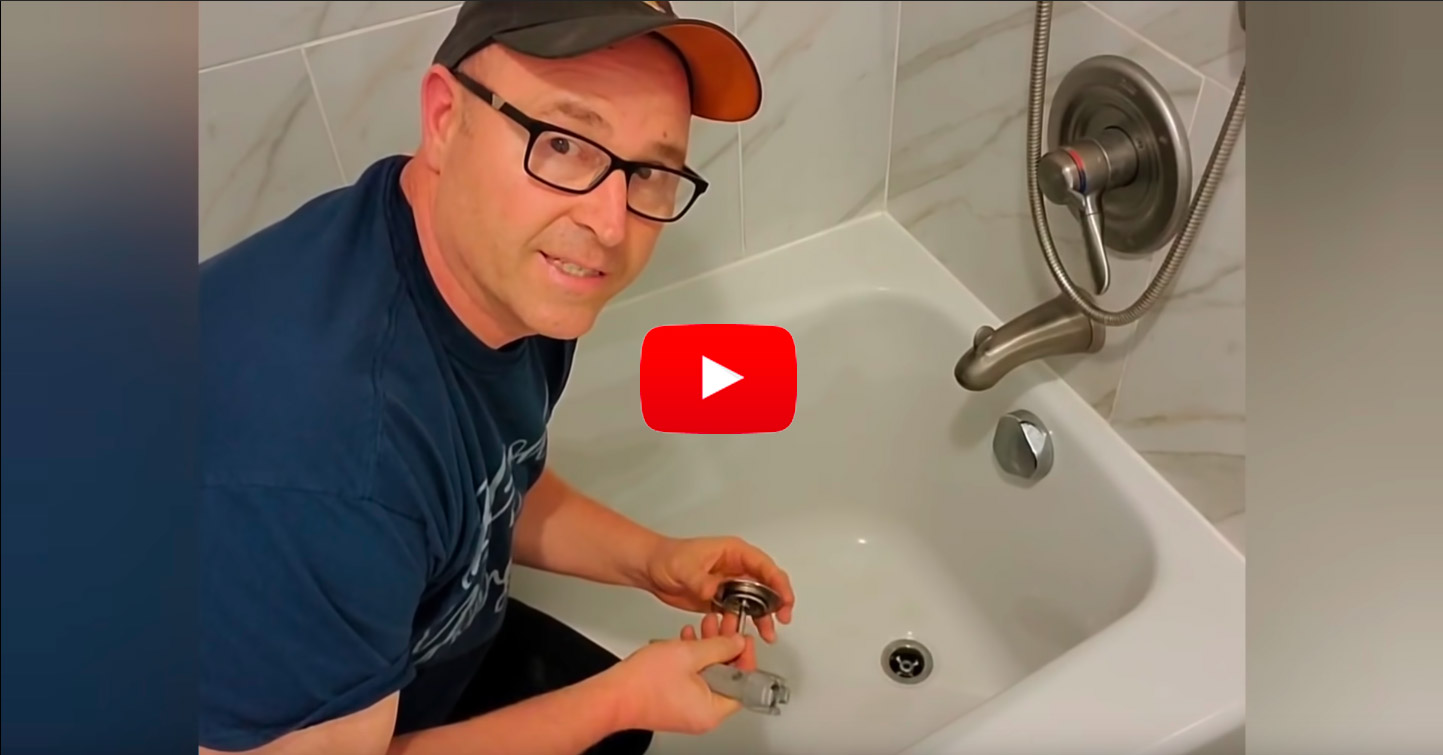 I'm proud of you! How a dad's viral videos resonate deeply with fatherless youth

There are many aspirational “influencers” on the internet creating carefully staged, professional looking content in the hope of attracting viewers.

But Rob Kenney, an assuming middle-aged man, seems to have stumbled into internet stardom with simple fatherly advice and love.

I recently discovered his YouTube channel called Dad, how do I? In around two months from April to May 2020 it attracted over one million subscribers and now it is well over two million. This very ordinary 55-year-old father of two young adults decided to start a YouTube channel during the Covid-19 lockdown and unexpectedly it went viral. One comment sums up the emotion that it’s stirring in the hearts of young people:

His father left when he was 12, now he has a YT channel called “Dad, how do I?” to help kids who’re growing up without dads. teaching them basic tasks that you’d usually ask your dad for help on. This is the purest thing …

After Rob’s dad walked out on his family of seven siblings, his elder brother assumed the ‘father’ role and became a stand in parent. It was Rob’s hope to be able to fill in the gap for young people growing up without a dad in the home.

His video topics include everyday basics that a dad might teach his son, like how to iron a shirt, how to shave, how to put up a shelf, how to fix a leaking toilet, how to unclog a bathtub drain and how to tie a tie. 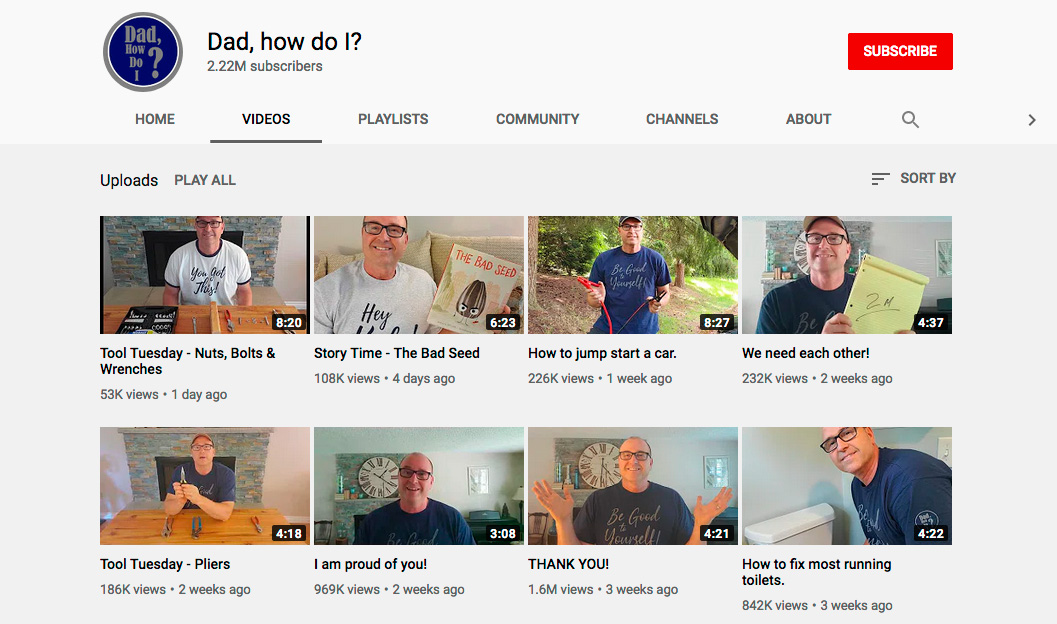 The internet can't understand what you all just did! Apparently it doesn't have an algorithm for kindness. :0) I am proud of all of you!

The social media gurus are trying to work out why so many people are subscribing. After Rob reached the two million mark, he put out a video thanking all of his subscribers, starting with, “Hey kids, …” and ending with “I’m proud of you.” In the details of this video post he wrote:

The internet can't understand what you all just did! [2 million+ people subscribing] Apparently it doesn't have an algorithm for kindness. :0) I am proud of all of you!

Reading the comments of just this one video post (there’s well over 16,000 comments) is heart wrenching. You can feel the raw emotion that even the phrase “hey kids” evokes:

i never had an actual dad growing up. i had one, but he sure didn’t act like one. and now i just find this guy. i’m in tears. thank you.

Hey Dad, that quote was just what I needed tonight and in general. I’m struggling to make sense of the things troubling me right now. I’ve never felt like I had anyone to talk to and therefore am not even comfortable or familiar trying to express what’s bothering me … Watching your videos brings a special kind of joy. Not only are they helpful, but it renews my faith that not only are there good people in the world, … Love you, Dad!

I heard the "hey kids " and started crying like an idiot lol, im scared to lose my mother and the rest of my family because I'm gay, the second I think about it my chest starts to hurt and I cant breathe.

I'm not even a kid anymore yet I cry my eyes out when you say "I am proud of you". Thank you for being our father figure we all need

I was raised by a single mom - my dad left shortly after i was born. I saw the title of this video alone and started crying. We love you! Thank you so much for all you do!

I have a dad but never acted like one, I cried when he said “hey kids”.

First time feeling comfortable on the comments section coz all of us just have the same problem which is being without dad!

You’ve shown me more love in 5 minutes than my “dad” has in 15 years The tears hit me when you said “I love you and I’m proud of you” I don’t think I’ve even been told those words before.

Will you be my new dad? My Internet dad?

Oh dad we need u so much please stay with us!

My dad was an abusive drug addict before he walked out on me when I was 4, I've always been a hardass but seeing your channel just made me cry for the first time in a while man, Thanks, Dad.

This video found me when I’m at my lowest! When you said I’m proud of you, I literally bawled my eyes out. Thanks dad. Lots of love for you!

And the comments go on in the same vein showing a huge father void.

As I wrote in my book Lost Boys: Bring Them Home, fatherlessness is becoming more and more common and the social impacts on children are significant.

Fatherlessness is becoming more and more common and the social impacts on children are significant.

Fatherless children are exposed more to exploitation and abuse and are at greater risk of suffering physical, emotional, and sexual abuse and emotional maltreatment with 100 times higher risk of fatal abuse.

Take time to absorb this. Children – even infants -- are 20 times more likely to be sexually abused.

A UK study found that since the 1980’s the IQ of boys has dropped a whopping 15 points. This is huge. There are a number of reasons pointing to this outcome, one of them being time spent with their father. Boys IQ increased with time spent with their father up to the age of 11 years. A recent article reports that the West is having an intelligence crisis stating IQ rates are dropping in many developed countries and that doesn’t bode well for humanity. Could fatherlessness be contributing to this crisis?

If all of this research on fatherlessness doesn’t highlight the huge public health risk, or a risk to the flourishing of a nation, then I don’t know what does.

Our fatherless boys are emotionally starved of the unconditional love of a father. And I believe this is why they yearn to hear the words from an ordinary father like Rob saying, “Hey kids” and “I’m proud of you.”

It makes me fall to my knees and cry out to God for the fatherless.

May the fathers of this nation awake and see that their sons need them! They are aching to be called son and to be told I’m proud of you. Our nation needs our fathers to stand up and take responsibility for their children.

“But while he was still a long way off, his father saw him and was filled with compassion for him; he ran to his son, threw his arms around him and kissed him.” Luke 15:20 NIV