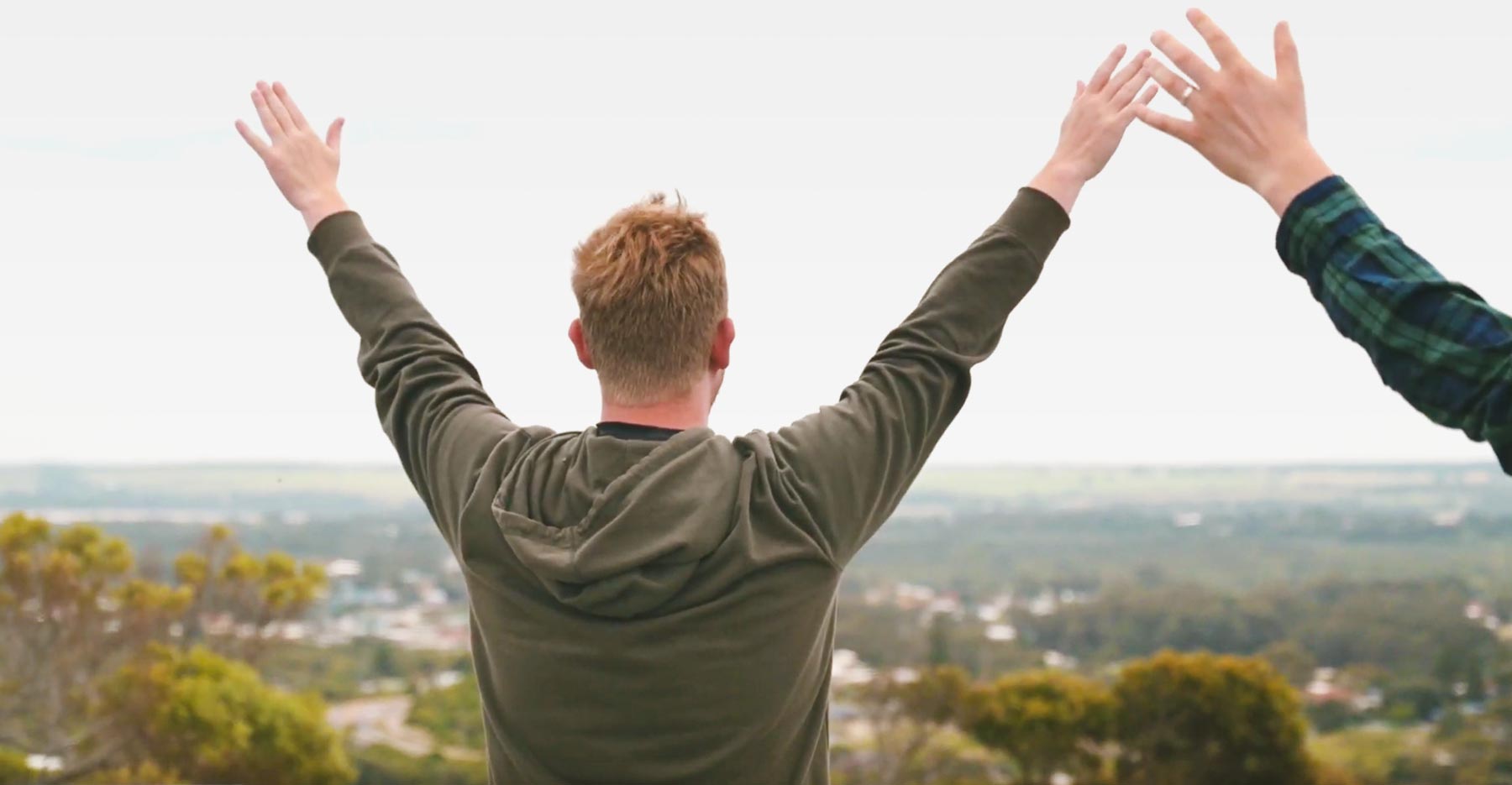 All believers are called to be on mission – sharing our faith and making disciples in whatever context we’re in.

But when you leave the comfort and security of home to be a missionary in your own nation it brings a new layer of intentionality and focus to this call.

Last year Youth for Christ launched a mobile mission team of five young leaders in their twenties who did just that. Travelling around the nation, seeking God and following His call to make disciples.

On the team were Nathan, Mat & Jo, Isaac & Emily along with their two-year-old daughter. 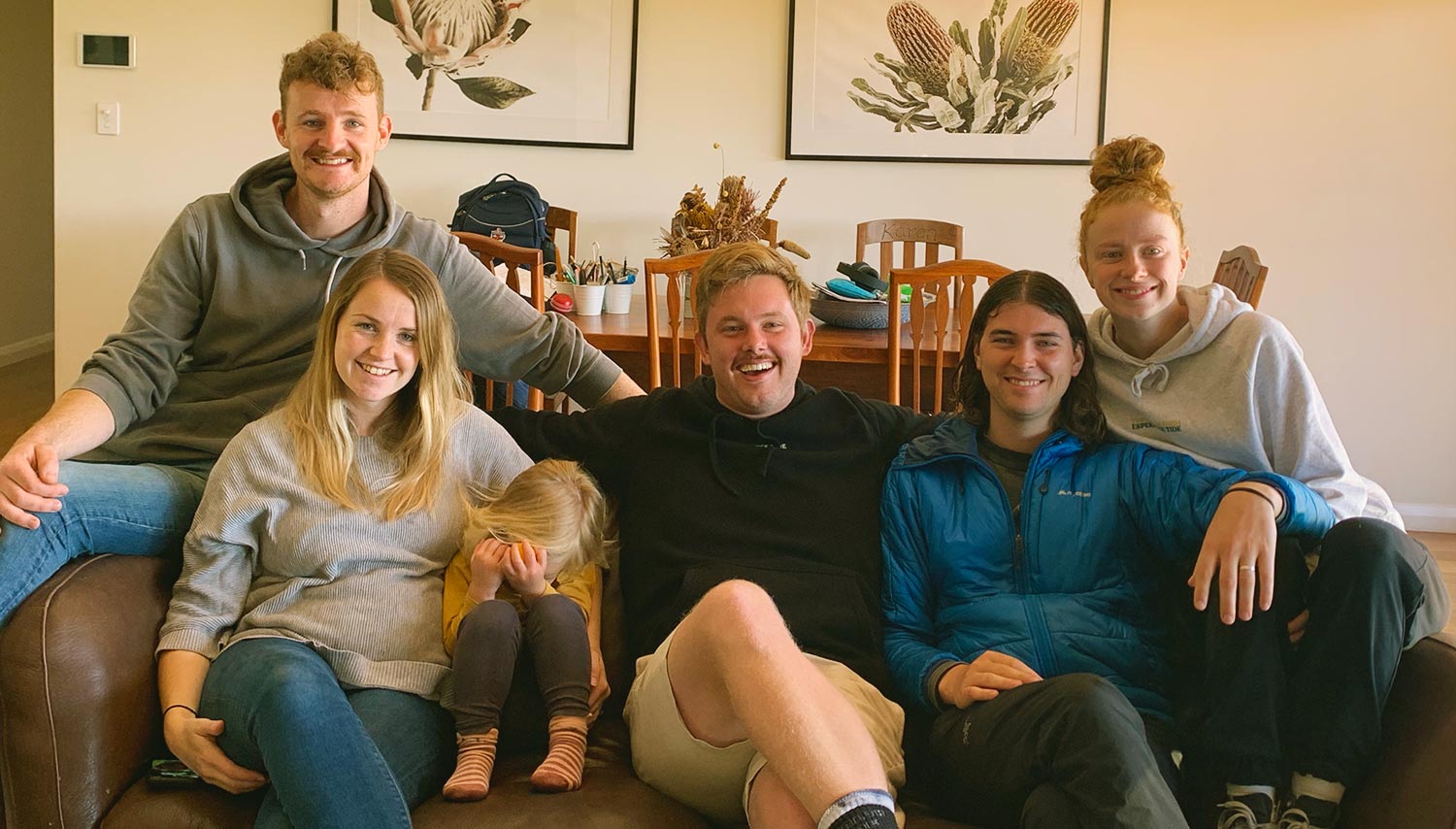 We lived in a caravan as a family for the whole year, moving from place to place. It was hard work… but God made it possible.

So what did they learn from this process?

We asked each of them to share some of their personal takeaways from 10 months on mission and on the road.

In the past I've thought that doing something radical, like this trip, will help me overcome the apathy and complacency that we often face as Christians. But in reality, I still needed to overcome the same traps anyway. What I've learnt is that having a community closely around me really lifted me from those places. As one of us struggled, the culture and commitment of the team helped draw us all up. Extravagance didn't change things, but my community did. - Isaac

Our team really became like a family over the year, in the truest sense of the word. I now look back and see the radical impact of choosing love in the midst of confusion and conflict. Overcoming these trials together seemed to always lead to breakthroughs in our relationships and our ministry. This was particularly formative for me and has taught me a lot about how to be patient, resilient and loving in difficult times. – Nathan

We couldn’t have done this year without our wonderful support network and without our church community. They backed us the whole way! Checking in and encouraging us, and always only a phone call away to unpack crazy events, share testimonies, provide personal prayer and wisdom. - Emily 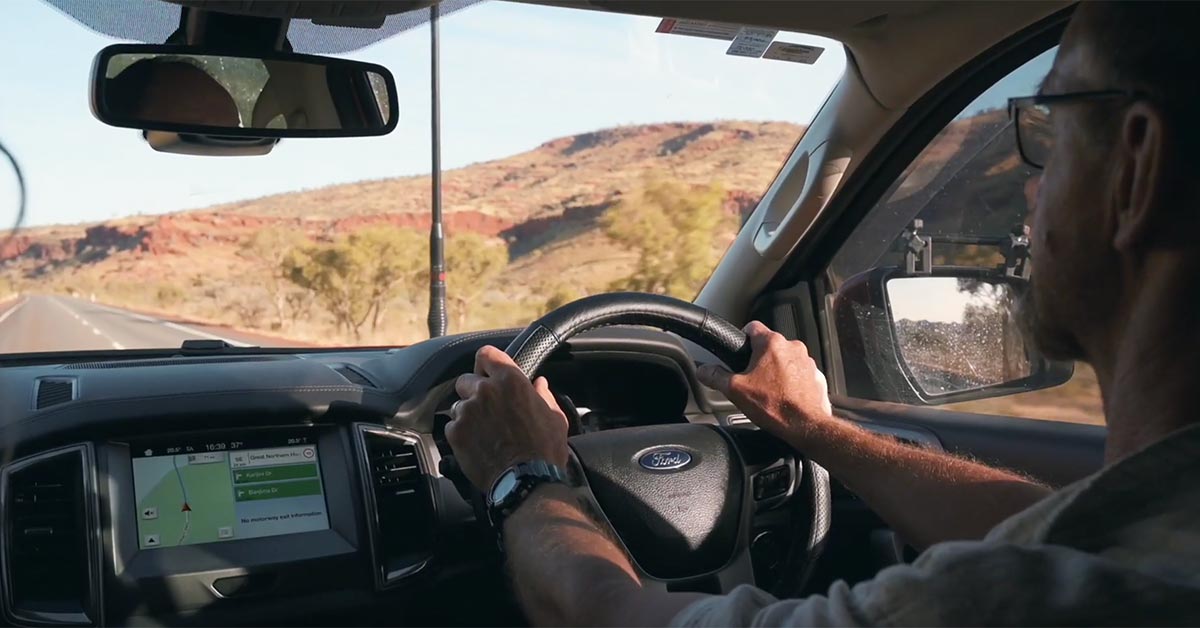 We’re part of a big church

Christians are amazing!  We’re diverse and different, but we have found time and time again that a deep connection can be formed with near-strangers when you are both on the same mission.

We have been accepted and loved deeply by people of different ages, genders, cultures, and backgrounds, all because we are united in the Lord.

I have learnt that a unified church can do anything, and that when churches work together and focus on what they do have in common, incredible fruit will follow.

I have also watched and been inspired by so many families who don’t just “go to church” or “work in ministry”, but that truly believe and live as if their family was their ministry. I’ve watched as people open up their homes, host people, meet in parks, disciple their kids, share and support, all of which was a powerful demonstration to me of what the church looks like.

I have been inspired by Christians all over this nation who are truly acting as the church, and I’m thankful to have spent time with them. - Jo

A deep connection can be formed with near-strangers when you are both on the same mission. 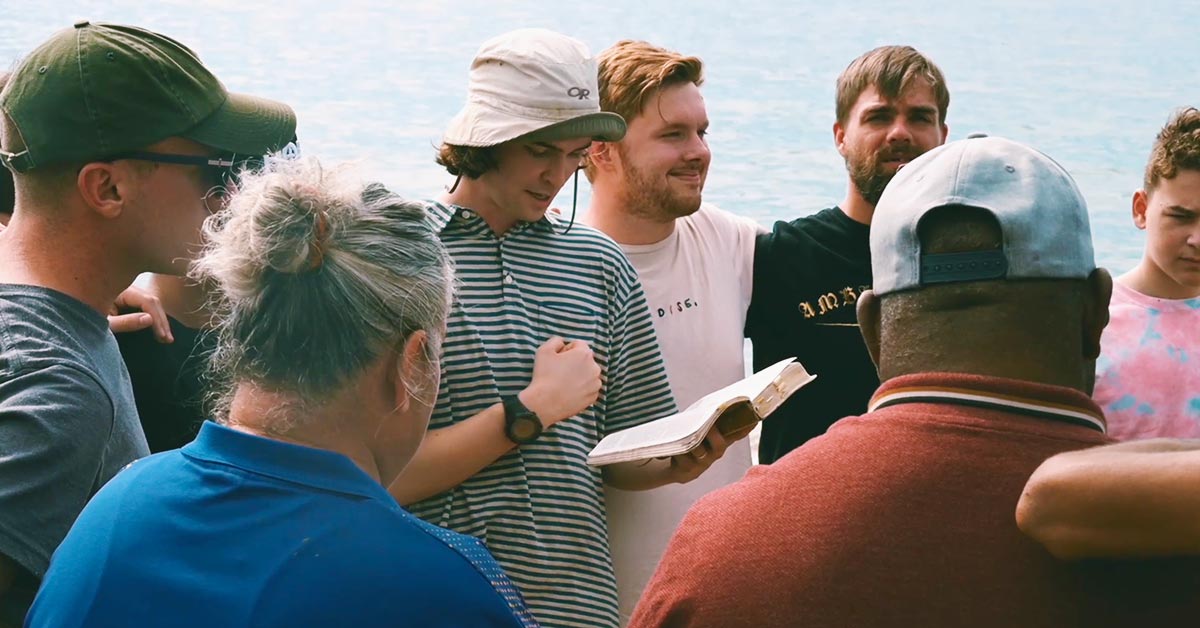 The Lord had us on some incredible prayer assignments during the year and when we were obedient in those, success seemed to follow. I've had a deep conviction come out of this year that I need to learn how to primarily engage things by prayer before anything else. Decisions, ministry - even parenting! - Isaac

I've had a deep conviction come out of this year that I need to learn how to primarily engage things by prayer before anything else.

Prayer changes and refines us too

Before doing missions, I've rarely been in an environment of regular prayer with believers, outside of my personal quiet times. With hindsight, I can now see the fruit that flowed from prayer. Both in the supernatural move of the Holy Spirit in response but also in the change this prayer focus formed in us. And it is the later aspect that I see as personally life changing.

These times before the presence of the Lord – beholding His love, power, holiness, gentleness, mercy and grace – taught me so much of the goodness of God. To not only be with us, and to not only hear us, but to gently yet powerfully invite us to walk in His ways. Again and again. - Nathan

People are more open than we think

One thing that I’ve felt a lot when considering evangelism is that sharing with people will annoy them. But in fact, around 90% of my interactions with people when sharing the Gospel are positive. If people don't want to hear it, most of the time they just walk off, maybe with a bit of swearing. A lot of people also had religious background and/or grew up in the church, often this came with a response that communicated 'ah, I already know all that stuff'.

One man had grown up in church, and he knew God, but was feeling the condemnation of a life of religion (a story I'm very familiar with). I shared with him and he responded so positively that when I prayed for him he also reached his hand to my shoulder and prayed for me. He expressed that he had been having a rough time recently and that not only had the interaction blessed and encouraged him, it had made his week! - Mat 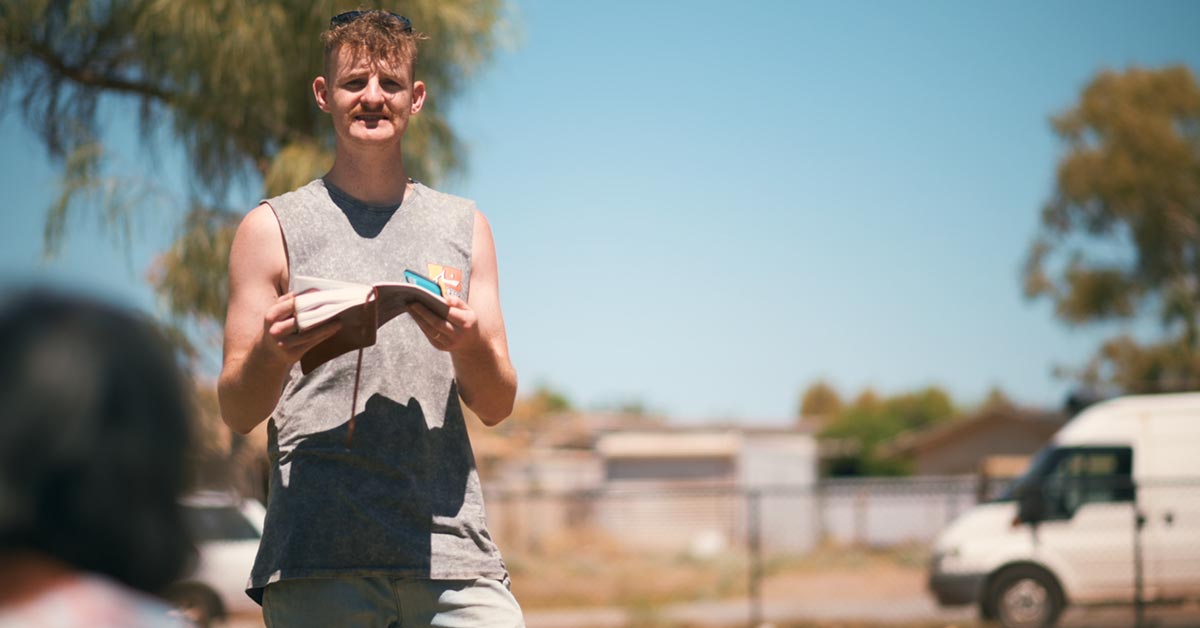 A lot of people don’t know that Jesus loves them

I asked lots of people, out of interest but also to share the Gospel, 'have you ever heard that Jesus loves you? And I sadly learnt that many people haven’t, let alone heard the Gospel.

After connecting with a group of young men to play volleyball one night I asked them this question. They all responded with a confident 'no' they had never been told that Jesus loves them. But this opened an opportunity to share the Gospel with them. They were visibly moved and impacted, and were keen to check out the Hope Cards we left with them. - Mat

Sharing Jesus is worth any personal discomfort

I learnt that people are worth the effort and the discomfort and the potential disappointment. There were times where I didn’t feel like serving or giving up my time and energy, but the Holy Spirit was ready and willing, and when I gave myself to that I too became willing and saw Jesus change people’s lives. - Jo

One indigenous lady was at first hesitant to interact with me when I offered her a bible. But, as I sat with her and very unassumingly just chatted with and encouraged her she ended up sharing a lot about her background and asked for me to pray for her. Then she asked for some verses for encouragement in the dark season she was in and I showed her Psalm 23. She burst into tears because she had remembered hearing the psalm earlier in life and it had become a mantra for her to help her get through. She hadn't had dinner and so we bought her some and gave her a gift. She responded so beautifully, saying that she hadn't 'felt so loved in a long time' and was moved to tears by our time and the encouragement she felt from the Lord.  - Mat

Travelling as a family was incredible! We went with very open minds, knowing we were called to do this with a toddler, and relying fully on God for Him to care for all our needs. We lived in a caravan as a family for the whole year, moving from place to place. It was hard work… but God made it possible.

My faith has increased dramatically! There’s knowing He can do it, and then there’s knowing, believing and seeing it happen, again and again. – Emily 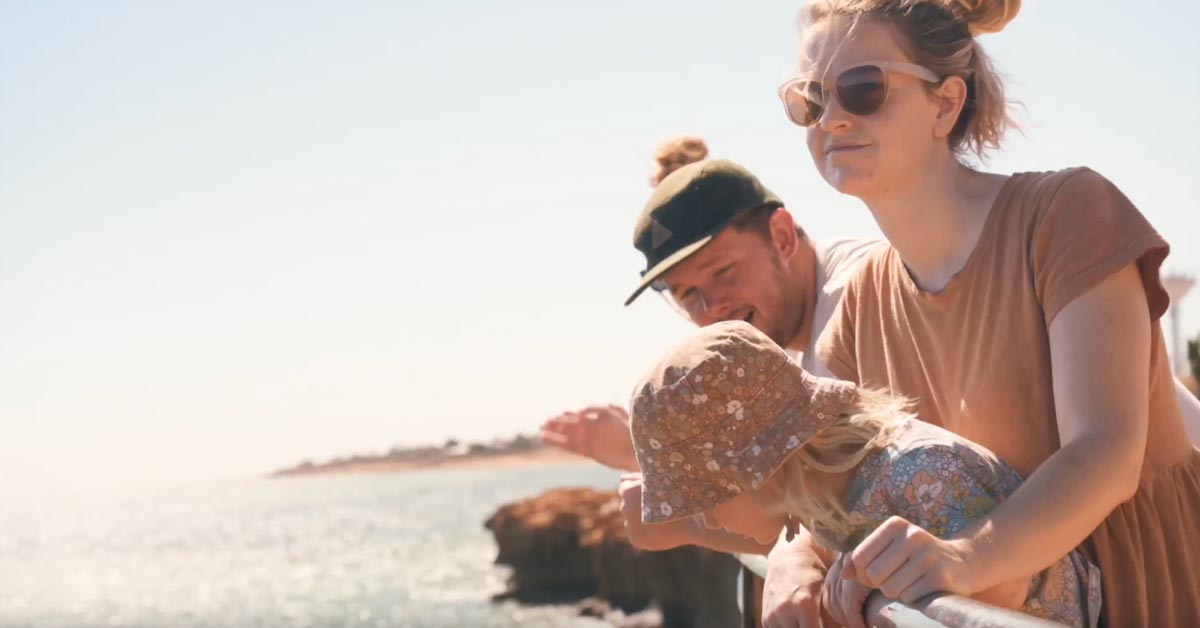